The gestures, postures and digital habits occurring in the digital everyday

Curious Rituals is a project about gestures, postures and digital habits occurring in the digital everyday: recalibration of a smartphone doing an horizontal 8 sign with the hand, swiping of wallet with RFID cards in public transports, etc. It consists in a documentation of current digital gestures in a book format, and a design fiction film that speculate about their evolution.

The questions we asked and the possible implications we arrived at on the project, should be relevant to anyone who is interested in envisioning the future. These are starting points, first questions on how technology could be domesticated, repurposed, recycled in interesting ways outside normative technological discourse. In turn, we hope the answers we come across during the project would lead us to alternative paths not yet explored.

The curious habits described in this book can be seen as ingredients with which technological objects are domesticated by people, integrated into their own daily routines. Fixing strategies, nervous tics, device juggling or courtesy postures, to name just a few, are not only peculiar interaction habits, they reveal how people normalize so-called “futuristic technologies” or what seemed magical and complex at first. They highlight the ingenuity users employ to repurpose and adapt digital technologies to their own context. One should see these insights as constant design patterns in the evolution of technological products and services. Read an introductory text by Dan Hill. 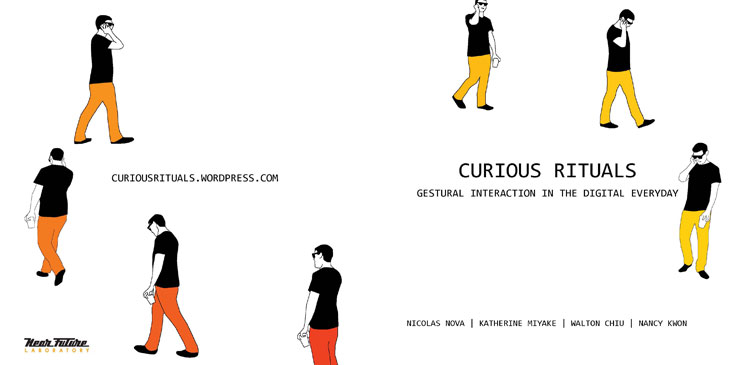 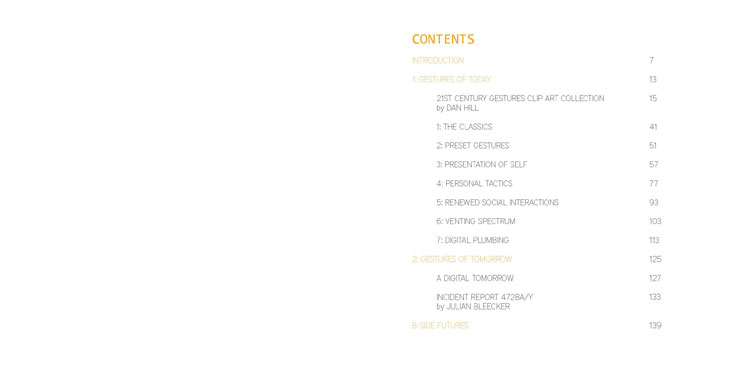 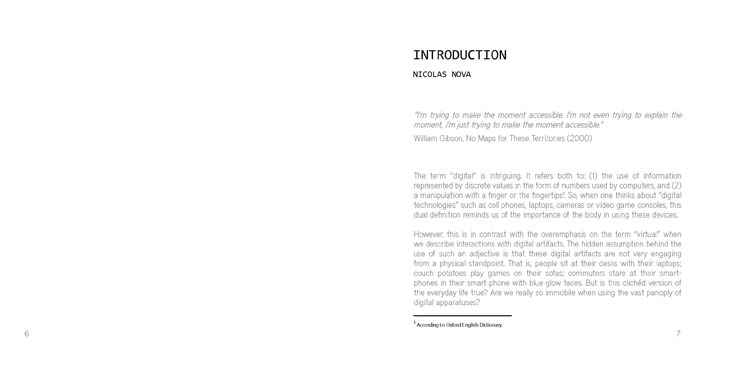 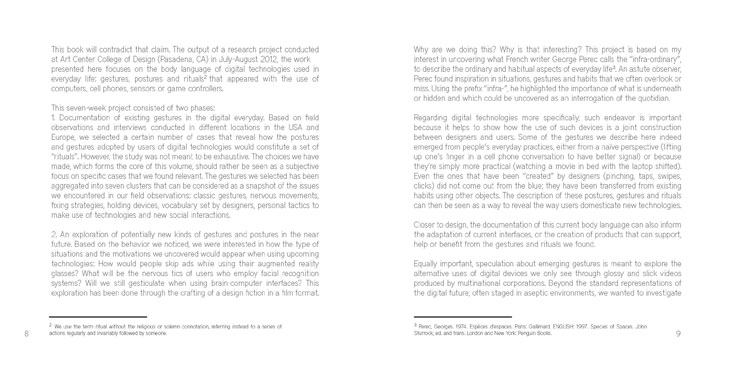 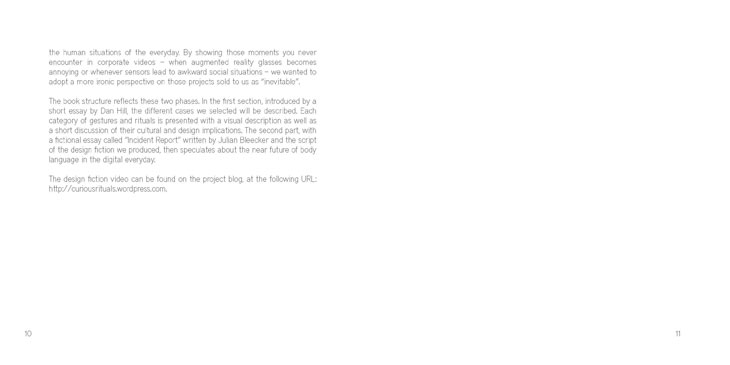 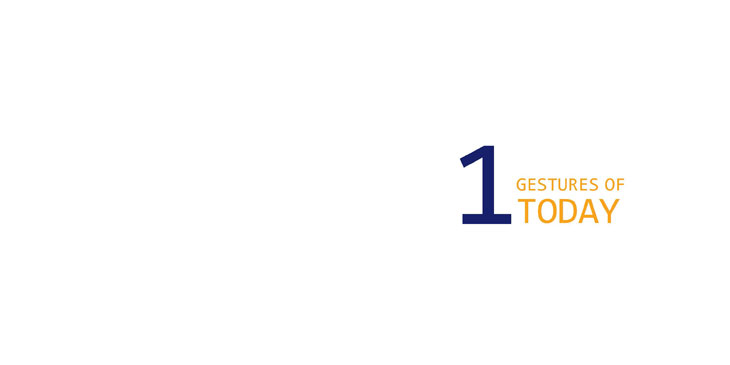 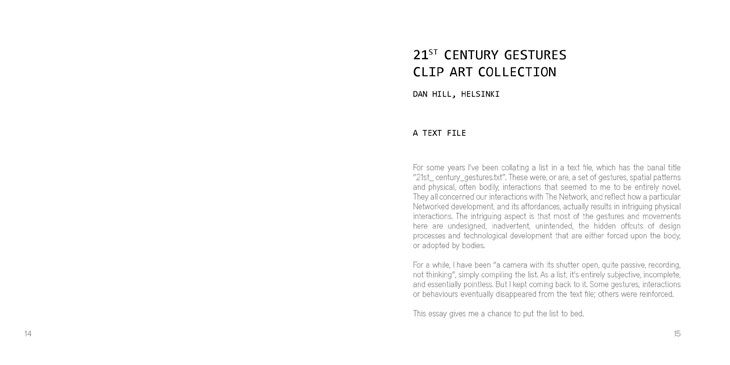 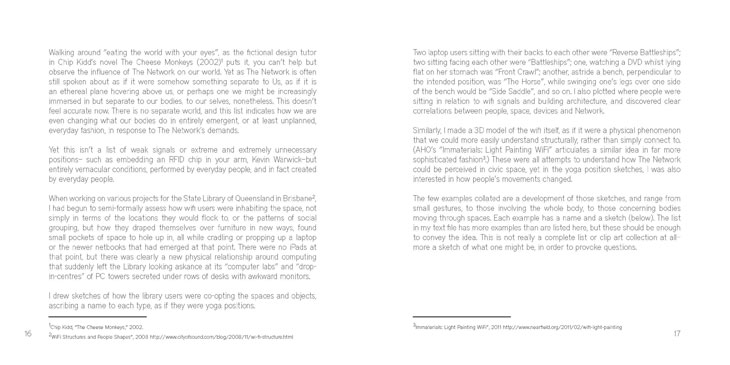 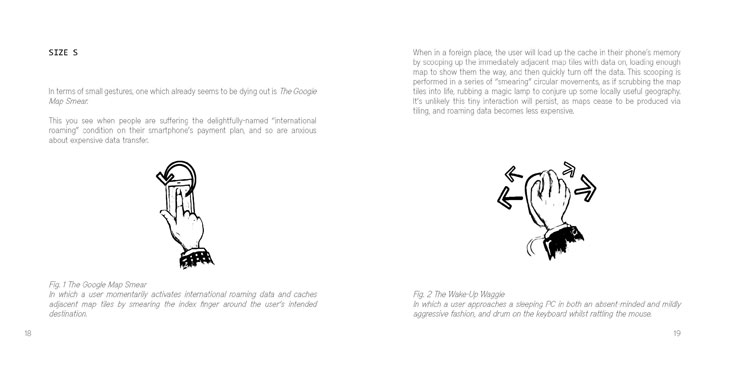 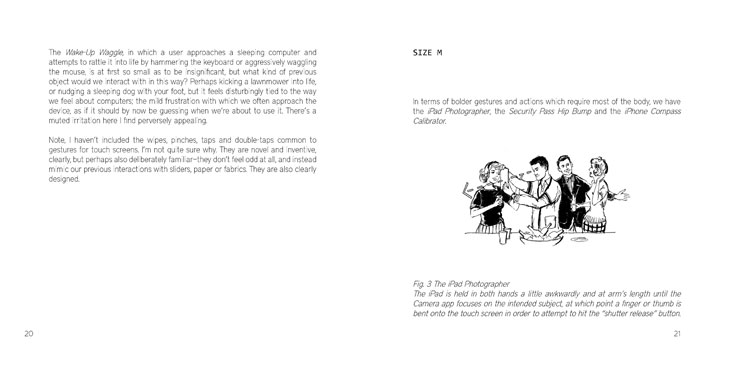 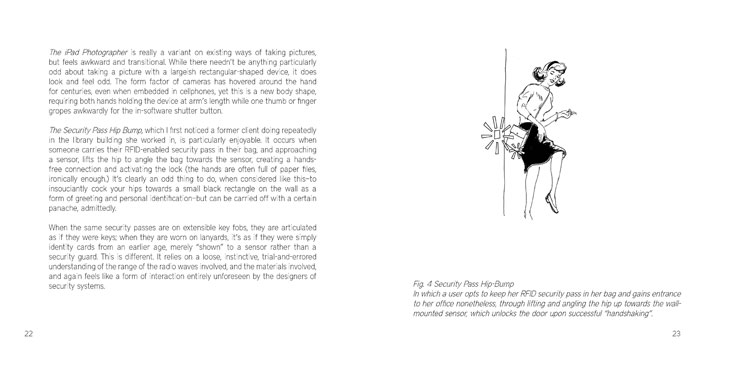 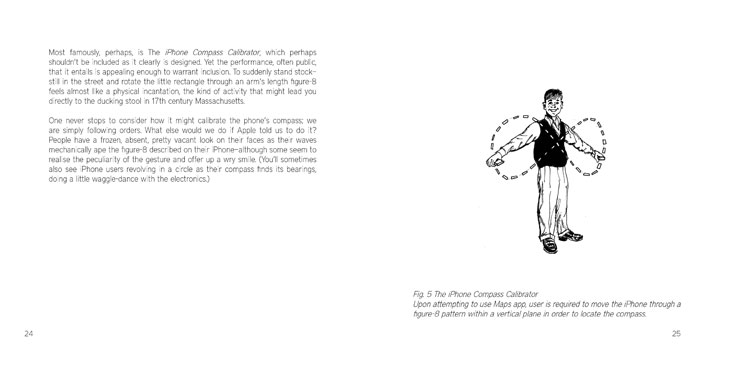 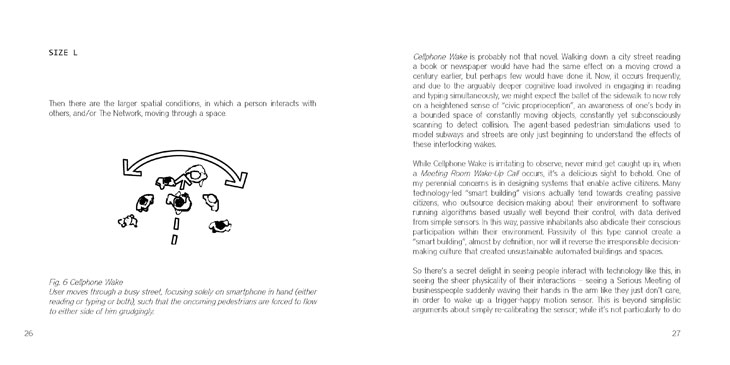 Our speculations about the future of digital gestures in this film are not just meant to envision the “future” or the evolution of technology. They can also be seen as a “B-side” to future scenarios produced and promoted by high-tech companies. The “curious rituals” are really about the gaps and junctures glossy corporate videos on the “future of technology” do not reveal; possible alternative scenarios where some of these devices could be adopted, mis-used, re-appropriated.

The term “digital” is intriguing. It refers both to: (1) the use of information represented by discrete values in the form of numbers used by computers, and (2) a manipulation with a finger or the fingertips1. So, when one thinks about “digital technologies” such as cell phones, laptops, cameras or video game consoles, this dual definition reminds us of the importance of the body in using these devices.

However, this is in contrast with the overemphasis on the term “virtual” when we describe interactions with digital artifacts. The hidden assumption behind the use of such an adjective is that these digital artifacts are not very engaging from a physical standpoint. That is, people sit at their desks with their laptops; couch potatoes play games on their sofas; commuters stare at their smart- phones in their smart-phone with blue-glow faces. But is this clichéd version of the everyday life true? Are we really so immobile when using the vast panoply of digital apparatuses?

This project contradict that claim. The output of a research project conducted at Art Center College of Design (Pasadena, CA) in July-August 2012, the work presented here focuses on the body language of digital technologies used in everyday life: gestures, postures and rituals2 that appeared with the use of computers, cell phones, sensors or game controllers. 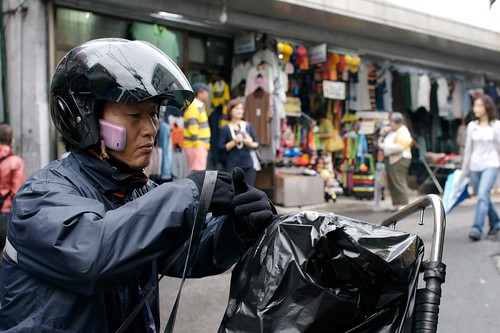 1. Documentation of existing gestures in the digital everyday. Based on field observations and interviews conducted in different locations in the USA and Europe, we selected a certain number of cases that reveal how the postures and gestures adopted by users of digital technologies would constitute a set of “rituals”. However, the study was not meant to be exhaustive. The choices we have made, which forms the core of this volume, should rather be seen as a subjective focus on specific cases that we found relevant. The gestures we selected has been aggregated into seven clusters that can be considered as a snapshot of the issues we encountered in our field observations: classic gestures, nervous movements, fixing strategies, holding devices, vocabulary set by designers, personal tactics to make use of technologies and new social interactions.

2. An exploration of potentially new kinds of gestures and postures in the near future. Based on the behavior we noticed, we were interested in how the type of situations and the motivations we uncovered would appear when using upcoming technologies: How would people skip ads while using their augmented reality glasses? What will be the nervous tics of users who employ facial recognition systems? Will we still gesticulate when using brain-computer interfaces? This exploration has been done through the crafting of a design fiction in a film format. 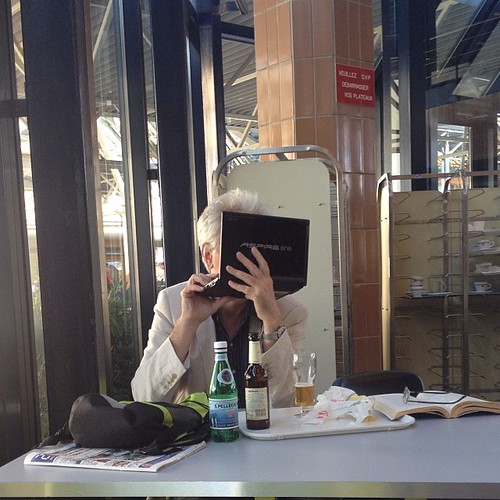 Why are we doing this? Why is that interesting? This project is based on my interest in uncovering what French writer George Perec calls the “infra-ordinary”, to describe the ordinary and habitual aspects of everyday life. An astute observer, Perec found inspiration in situations, gestures and habits that we often overlook or miss. Using the prefix “infra-”, he highlighted the importance of what is underneath or hidden and which could be uncovered as an interrogation of the quotidian.

Regarding digital technologies more specifically, such endeavor is important because it helps to show how the use of such devices is a joint construction between designers and users. Some of the gestures we describe here indeed emerged from people’s everyday practices, either from a naïve perspective (lifting up one’s finger in a cell phone conversation to have better signal) or because they’re simply more practical (watching a movie in bed with the laptop shifted). Even the ones that have been “created” by designers (pinching, taps, swipes, clicks) did not come out from the blue; they have been transferred from existing habits using other objects. The description of these postures, gestures and rituals can then be seen as a way to reveal the way users domesticate new technologies.

Closer to design, the documentation of this current body language can also inform the adaptation of current interfaces, or the creation of products that can support, help or benefit from the gestures and rituals we found.

Equally important, speculation about emerging gestures is meant to explore the alternative uses of digital devices we only see through glossy and slick videos produced by multinational corporations. Beyond the standard representations of the digital future, often staged in aseptic environments, we wanted to investigate the human situations of the everyday. By showing those moments you never encounter in corporate videos – when augmented reality glasses becomes annoying or whenever sensors lead to awkward social situations – we wanted to adopt a more ironic perspective on those projects sold to us as “inevitable”. 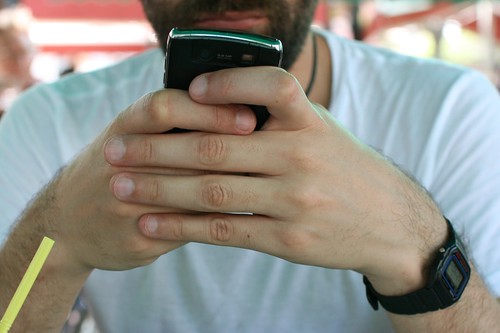 The project was produced as part of a research residency in the Media Design Program at Art Center College of Design in Pasadena, California.

Nicolas Nova (PhD) is a researcher, writer and co-founder of The Near Future Laboratory. He is also Professor at the Geneva University of Arts and Design (HEAD–Geneva).

Nancy Kwon is a Los Angeles based designer/artist with a BA in Film/Video and Photographic Arts from Pratt Institute, as well as an MFA from the Graduate Media Design Program at the Art Center College of Design in Pasadena, CA.

Katie Miyake is a Los Angeles based designer/artist with a BA in Design Media Arts from UCLA and an MFA from the Graduate Media Design Program at the Art Center College of Design in Pasadena, CA.

Walton Chiu is a MFA candidate at the Graduate Media Design Program at the Art Center College of Design in Pasadena, CA

Near Future Laboratory is a thinking, making, design, development and research practice based in California and Europe.

Our goal is to understand how imaginations and hypothesis become materialized to swerve the present into new, more habitable near future worlds. Our practice involves working closely with creative, thoughtful experts within various domains of work depending on the needs of any particular project. Our associations with a wide network of well-respected and accomplished practitioners makes it possible to work from concept development to construction of unique digital designs.